Live Webcast of Data Presentation and Discussion by KOL, Tarek I. Hassanein, M.D. at Noon ET on Tuesday, November 12, 2019

, /PRNewswire/ —  (Nasdaq: DRRX) today announced the results from its Phase 2a clinical trial of DUR-928 in alcoholic hepatitis (AH), presented as a late-breaking oral presentation at The Liver Meeting®.  The study results were also selected for inclusion in the ‘Best of The Liver Meeting’ summary slide presentation in the alcohol-related liver disease category.  Today at , will host a Key Opinion Leader (KOL) webcast featuring a presentation of the results delivered by one of the principal investigators of the trial, , M.D. Dr. Hassanein will be available for a question and answer session following the presentation.

Results
All patients treated with DUR-928 in this trial survived the 28-day follow-up period and there were no drug-related serious adverse events.  Patients treated with DUR-928 had a statistically significant reduction from baseline in bilirubin at day 7 and 28 and MELD at day 28.  Lille scores were also statistically significantly lower than those from a well-matched group of patients in a contemporary ongoing trial as well as several published historical controls.  74% of all DUR-928 treated patients and 67% of those with severe AH were discharged from the hospital within four days of receiving a single dose of DUR-928.

“The results of this study are remarkable and much was learned from this Phase 2a clinical trial,” stated Dr. , a principal investigator in the trial.  “The low scores, the early reduction in bilirubin and the number of severe AH patients who were able to be discharged after a single dose of DUR-928 is striking and the safety profile looks very promising as well.”

scores are used in clinical practice to help determine the prognosis and response of AH patients after seven days of treatment.  The lower the score, the better the prognosis.  Patients with a score below 0.45 have a six-month survival rate of 85% compared to those with scores above 0.45, with only a 25% six-month survival rate.[1]  The chart below shows the scores for individual AH patients treated with DUR-928 plotted as a function of their baseline MELD scores.  In our study, the median score for patients treated with DUR-928 was 0.10.  The median score among a cohort of 15 patients treated with standard of care at the (UL) was 0.41 (shown as historical control).

The chart below shows individual patient scores plotted as a function of their baseline MELD scores.

As shown below, 100% of patients in the 30mg and 90mg DUR-928 dosing groups were treatment responders based on their scores.  89% of the overall DUR-928 patient population were treatment responders.  Patients with severe AH, as defined by Maddrey’s Discriminant Function >32 or MELD 21-30, and baseline serum bilirubin above 8 mg/dL, had similarly high response rates to DUR-928 treatment.

The scores of patients treated with DUR-928 in this trial were also significantly lower than several selected published historical studies (Hepatology 2007, 45:1348-1354; Gut 2011, 60:255-260), in which patients had similar baseline bilirubin, albumin, Creatinine, prothrombin time and DF scores, and were treated with standard of care with or without corticosteroids.  Of course, due to the historical nature of these studies, such comparisons should be taken cautiously. 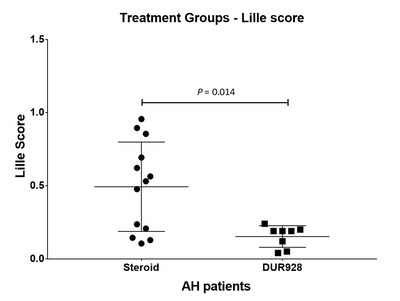 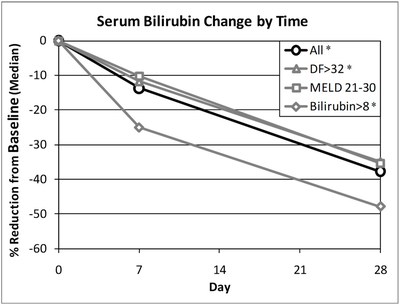 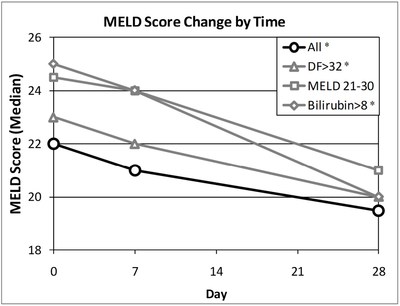 MELD is calculated based on (a) bilirubin, (b) serum creatinine (sCr), and (c) International Normalized Ratio (INR), which is a measure of prothrombin time.

Safety and Pharmacokinetics
DUR-928 was well tolerated at all doses tested.  There were no drug-related serious adverse events and only three adverse events designated as possibly related to DUR-928: one occurrence of moderate generalized pruritus, one mild rash and one grade two alkaline phosphatase.  There were no discontinuations, early withdrawals or termination of study drug or study participation due to adverse events.  All patients treated with DUR-928 survived through the 28-day follow-up period. Drug exposures were dose proportional and were not affected by the severity of the disease.

About the DUR-928 Alcoholic Hepatitis Phase 2a Trial
The open-label, dose escalation, multi-center study was designed to determine the safety, pharmacokinetics and pharmacodynamics of DUR-928 in AH patients following treatment.  This included assessing liver biochemistry, biomarkers, and prognostic scores such as the score.  Final enrollment included 19 patients with moderate and severe AH, who were administered DUR-928 intravenously at three different doses.  Eight patients (four moderate and four severe) were dosed at 30mg, seven patients (three moderate and four severe) were dosed at 90mg and four patients (all severe) were dosed at 150mg.  After being discharged on day two, one patient did not return for the scheduled day seven and day 28 follow-up visits; therefore , bilirubin and model of end-stage liver disease (MELD) data reported above are based on 18 patients.

Next Steps
is planning to conduct a double-blind, placebo-controlled, Phase 2b clinical trial evaluating DUR-928 in AH patients beginning mid-2020. Assuming reasonable enrollment rates, top line data from this trial would be available in 2022.

Conference Call and Webcast with Slides

A replay of the webcast and data slide presentation will be available on the Investor section of the website at https://investors.www.durect.com/ after the call.

About Dr. Dr. Hassanein is one of the investigators of the Phase 2a AH clinical trial and is board-certified in internal medicine, gastroenterology and transplant hepatology.  He is currently a professor of medicine and director of outreach services for liver transplantation at the School of Medicine, (UCSD).  He has been instrumental in establishing three major liver transplantation programs. Dr. Hassanein established the Southern California Liver Centers in 2009 to care for patients with advanced and complicated liver diseases, including alcoholic hepatitis, liver cancer, HCV and cirrhosis.  He is also the director of the , medical director of UCSD Sharp Liver Transplant Outreach Program and chief of gastroenterology and hepatology at in .  Dr. Hassanein has been the principal investigator on multiple international trials and has authored numerous publications.  Dr. Hassanein earned his medical degree from in .  He completed his residency training at in , and a research fellowship and a clinical fellowship in gastroenterology, hepatology and transplantation at the .

About Alcoholic Hepatitis (AH)
AH is an acute form of alcoholic liver disease (ALD), associated with long-term heavy intake of alcohol, and often occurs after a recent period of increased alcohol consumption.  AH is typically characterized by recent onset jaundice and hepatic failure.  An analysis of 77 studies published between 1971 and 2016, which included data from a total of 8,184 patients, showed the overall mortality from AH was 26% at 28 days.  According to the most recent data provided by the (AHRQ), a part of the (HHS), there were over 117,000 hospitalizations for patients with alcoholic hepatitis in 2016.  From a recent publication analyzing the mortality and costs associated with alcoholic hepatitis, the cost per patient is estimated at over in the first year.  ALD is one of the leading causes of liver transplants in the U.S., each of which costs over .

About
is a biopharmaceutical company actively developing therapeutics based on its Epigenetic Regulator Program and proprietary drug delivery platforms.  DUR‑928, a new chemical entity in Phase 2 development, is the lead candidate in Epigenetic Regulator Program.  An endogenous, orally bioavailable small molecule, DUR-928 has been shown in preclinical studies to play an important regulatory role in lipid homeostasis, inflammation, and cell survival.  Human applications may include acute organ injury such as AH and acute kidney injury (AKI), chronic hepatic diseases such as NASH, and inflammatory skin conditions such as psoriasis and atopic dermatitis.  DURECT’s advanced oral and injectable delivery technologies are designed to enable new indications and enhanced attributes for small-molecule and biologic drugs.   Key product candidates in this category include POSIMIR® (bupivacaine extended-release solution), an investigational locally-acting, non-opioid analgesic intended to provide up to 3 days of continuous pain relief after surgery, and a long-acting injectable SABER-based HIV investigational product being developed with Gilead. For more information about , please visit www.www.durect.com.

DURECT Forward-Looking Statement
The statements in this press release regarding the potential benefits and uses of DUR-928 to treat AH and about other potential uses of DUR-928 to treat renal diseases, such as NASH and AKI, and inflammatory skin conditions such as psoriasis and atopic dermatitis, the potential use of POSIMIR to treat post-operative pain, and the potential development of a long-acting injectable SABER-based HIV product with Gilead are forward-looking statements involving risks and uncertainties that can cause actual results to differ materially from those in such forward-looking statements.  Potential risks and uncertainties include, but are not limited to, the risk of delays in clinical trials or adverse safety events from patients administered with DUR-928, the risk that the ongoing clinical trials of DUR-928 in NASH or psoriasis do not successfully achieve their endpoints, the risk that placebo controlled studies of DUR-928 required for regulatory approval will not replicate results from  open label clinical trials or trials with small numbers of patients or historical controls, the risk that reductions in bilirubin, scores or MELD scores do not predict efficacy of therapy for AH, the risks that the long-acting injectable SABER-based HIV investigational product being developed with Gilead will not succeed or that Gilead will abandon this program, the risk that the will not recommend approval of POSIMIR or that the will not approve POSIMIR, and the risk of delays and costs due to additional work or other requirements imposed by regulatory agencies for continued development, approval or sale of any of our product candidates.  Further information regarding these and other risks related to is included in Form 10-Q filed on under the heading “Risk Factors” and in subsequent reports that we file with the .

NOTE: POSIMIR® and SABER® are trademarks of .  Other referenced trademarks belong to their respective owners.  DUR-928 and POSIMIR are drug candidates under development and have not been approved for commercialization by the or other health authorities.

Scroll to Top
We use cookies on our website to give you the most relevant experience by remembering your preferences and repeat visits. You can allow the use of all cookies by clicking “Accept All”. If you would like to refuse all non-essential cookies, you can do so by clicking “Decline All”. You can manage and withdraw your consent at any time using our cookie consent tool found here in Cookie Settings. For more information, see our Privacy Policy.
DECLINE ALLACCEPT ALL
Manage cookie consent

This website uses cookies to improve your experience while you navigate through the website. Out of these cookies, the cookies that are categorized as necessary are stored on your browser as they are essential for the working of basic functionalities of the website. We also use third-party cookies that help us analyze and understand how you use this website. These cookies will be stored in your browser only with your consent. You also have the option to opt-out of these cookies. But opting out of some of these cookies may have an effect on your browsing experience.
Necessary Always Enabled
Necessary cookies are absolutely essential for the website to function properly. These cookies ensure basic functionalities and security features of the website, anonymously.
Functional
Functional cookies help to perform certain functionalities like sharing the content of the website on social media platforms, collect feedbacks, and other third-party features.
Analytics
Analytical cookies are used to understand how visitors interact with the website. These cookies help provide information on metrics the number of visitors, bounce rate, traffic source, etc.
Advertisement
Advertisement cookies are used to provide visitors with relevant ads and marketing campaigns. These cookies track visitors across websites and collect information to provide customized ads.
Save & Accept